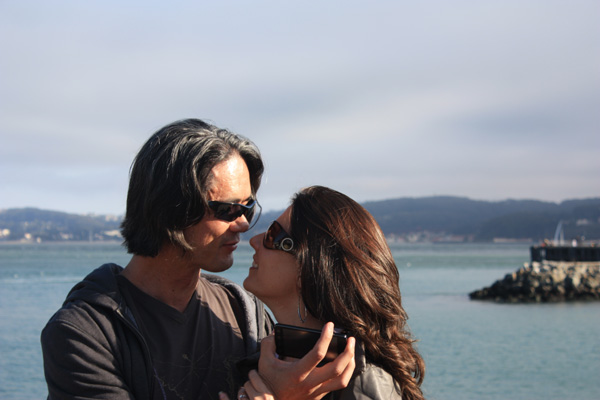 A kiss on the beach with my love!

When I last left off, I had just finished up racing for the season and also finished djing with the amazing closing night at W Lounge. The following week Angie and I went to San Francisco for Labor day weekend to see our dear friend Alexa. We took Friday off and flew in at a reasonable time to land there about noon, and then Alexa picked us up at the airport and drove us over to our hotel. After we dropped off our stuff and checked in, Angie and I walked a few blocks to grab something to eat at a local restaurant, then took a little nap and hung out. Later we went for a walk around some of the San Francisco neighborhoods as we waited to meet up with Alexa and Damian for dinner. 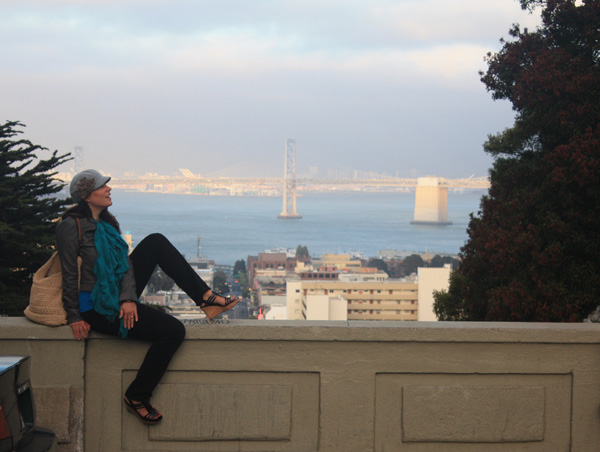 A re-do of Angelas cute photo from a few years back:)

We walked around some of the higher streets in San Francisco, trying to find the exact same spot where we took a photo of Angie and the Oakland bay bridge in the back ground. It was a bit chilly in the wind but fun, and we did eventually find the correct spot and take a few photos. After that we wound our way down a few blocks and ended up meeting with Damian and Alexa at a great Thai place and the prices were reasonable. After dinner, Alexa just drove us back to our hotel so we could get some sleep and an early start the next morning. 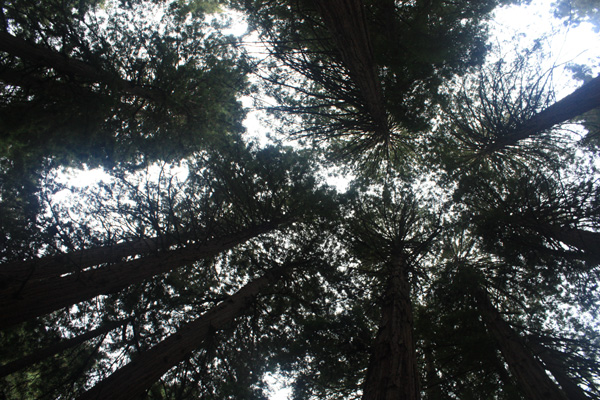 A brief walk through the Muir Woods en route to wine country.

We woke up early for our wine tour trip, which took us to the Miur woods and then on to three different vineyards. The morning was a little chilly but fun walking around in the woods, taking photos. The first vineyard we went to was pretty laid back, not much going on there, just a few tastings of sparkling wine, then off to lunch at the Sunflower Cafe in Sonoma where we enjoyed a delicious lunch. I had a great lamb meatloaf and Angie had some type of a meat sandwich, very fresh and tasty. I am so glad that I am enjoying natural foods so much more. After lunch we went over to the Madonna vineyards, and being kind of late in the day we were feeling like we didn’t really get a good amount to drink, so Damian purchased a bottle of wine and we drank it en-route to Cline vineyards. 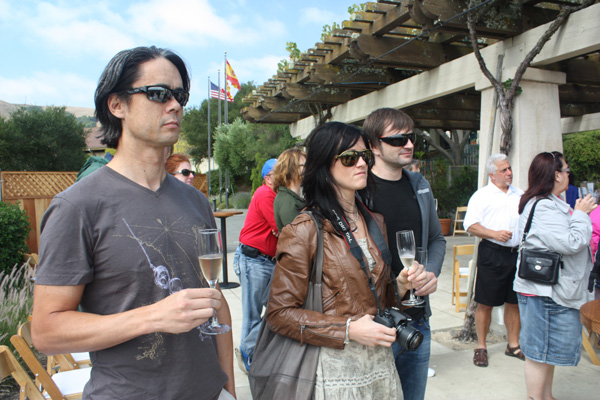 Starting our wine tour…its going to be a long day:)

Once we got to Cline vineyards, it seemed to be free flowing wine. We ended up getting pretty drunk and by the time we were on the bus home it seemed like it was a full on party. We were being pretty obnoxious and there weren’t really any fun people on the bus. Usually people get a bit more loosened up and more laid back as the day goes on. This really wasn’t the case here, but we made a party of it anyway. By the time we got back to the hotel, we were pretty lit and had bad headaches from the wine. We ordered some Pizza from an Indian food place called “Zantes” that made a Tiki Masala pizza. We were pretty wiped out by the time we were done with this and then just ended up crashing out. 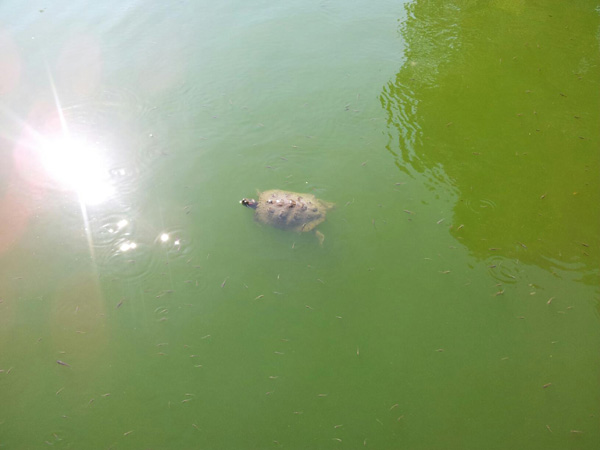 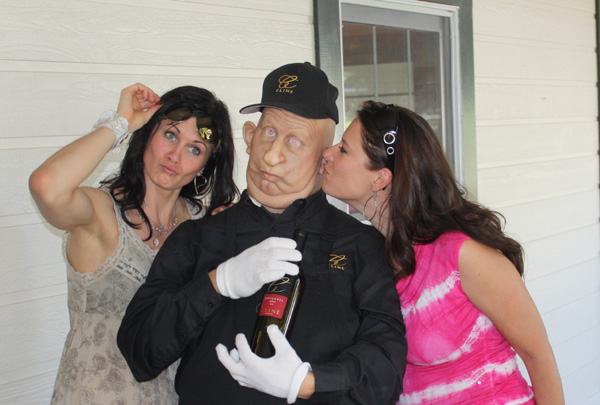 Angie and Alexa at Cline vineyards 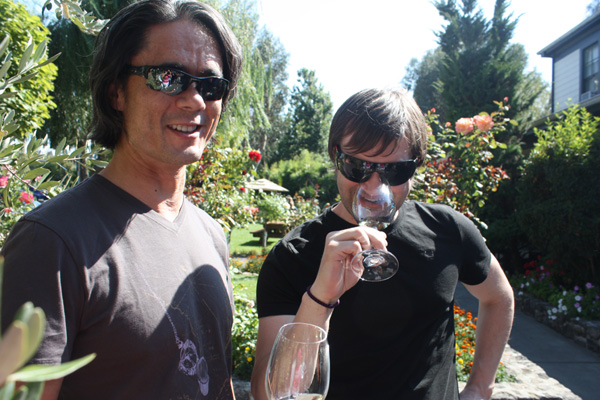 The next morning I got up and did an abbreviated workout since we were supposed to meet up for breakfast, although I could have trained a lot longer. It took a while for Damian and Alexa to meet up with us but around noon we went to a place called “Toast” for breakfast/brunch. They had some great food and fueled us up to walk around the bay and over by Ghiradelli square. We walked out onto the bay’s walkway, then over to a nearby park and met up with some of Alexas friends. It was a breezy and somewhat cool day in the park, after hanging out there for a half hour we went back over to Ghiardelli Square so Angela could get her trip ornament and I could get me a chocolate sundae! The line at Ghiardelli’s was absolutely mind blowing, unknowingly a 30 minute wait to get an order. I felt guilty after ordering as I was beginning my sugar diet. I ordered a ‘peanut butter & chocolate’ sundae which must have had a million calories, hardly worth the half hour wait and guilt. 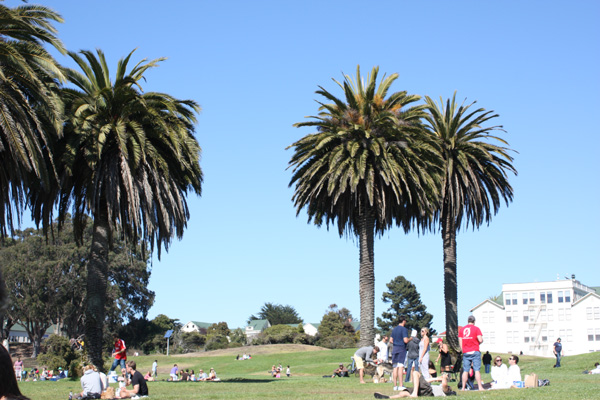 A nice breezy day in the park!

We then went back to the hotel and chilled out for a while, Alexa and Damian went back to their place to freshen up. Later in the evening we went out again, meeting at a cuban place called “Cha Cha Cha” in the Mission district. We had to walk and take the Bart, going through some pretty shady neighborhoods but once we got there it was great. The food was served Tapas style, so we ordered quite a few different appetizer dishes and sangria to drink. We pretty much closed the place down and afterwards Angie, Alexa and Damian still wanted to go out for longer but I was pretty bushed and went back to the hotel room to sleep while they went out for a bit longer. 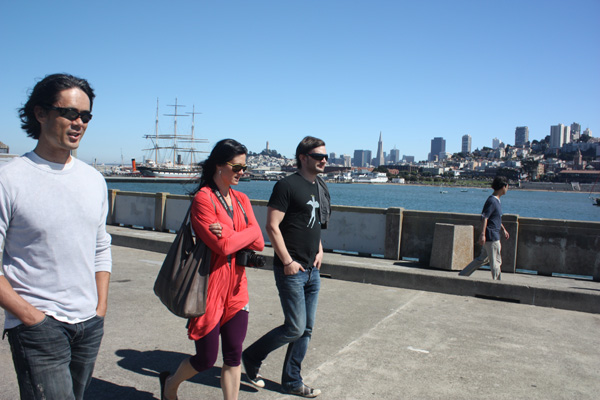 Walking around the bay in San Francisco with Alexa and Damian.

The next morning I got up and cranked out a fast workout before eating, Angie was still asleep so I went across the street to a ‘diner’ style place and ate a good old homecooked meal. The place was pretty funny, like from an old movie or something, complete with a cranky waitress. After I ate, Angie finally got up, we got packed up and checked out. Then we got picked up by Alexa and stored our luggage in her small car while we walked around, had lunch and then went shopping and found Angies wedding dress. After lunch and shopping we had just enough time to drive over to Alexas place in the Haight Ashbury district where we wer able to walk around, grab a coffee and breifly take in the scenery. After a quick walk through the neighborhoods we were off again, heading towards the airport and a trip home.